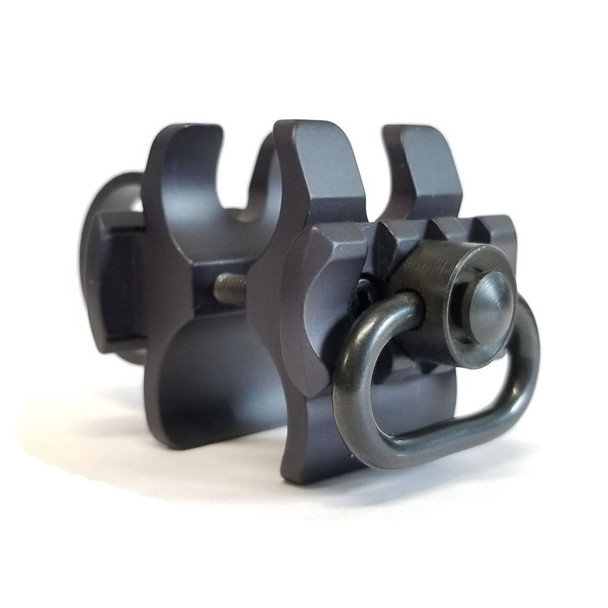 The CDM GEAR ROC-12S Shotgun Light Mount is a US made railed barrel clamp that is used to support factory and aftermarket 1" diameter magazine tubes, and extensions, while providing low profile mounting rails on the left and right side for rail mountable lights and acessories. The ROC-12S includes a limited rotation docking point for a PBQD sling swivel (sling swivel not included).

The rail and clamp half are manufactured as one piece from aluminum and precision CNC machined to size. All threaded holes are press formed into the mount for hardness. The entire mount is then machine finished to soften round edges before they type III mil spec hard coat anodized for durability.

Fingers at the top of the clamp allow for use with a barrel rib and/or compensation ports, as well as slight barrel taper, while a solid surface on the bottom accepts their 3M no slip grip pads to reduce movement under recoil.

Just 2 socket head cap screws work opposite each other to hold the clamp in place and are included along with a wrench and their 3M no slip grip pads for the magazine tube. The mount requires 1 1/2" of mounting surface without interference from a heat shield. Will not work with heavy walled barrels or magazine tubes larger than 1".

MSRP:
Now: $43.95
Was: $47.95
Features of CDM GEAR MTR Shotgun Light Mount for Mossberg MTR For Mossberg 590A1 with heavy barrel or Mossberg 500 with a 1/2" of available spaceIncludes polyurethane spacer for different size...