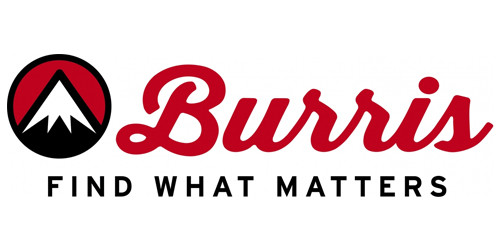 If you’ve taken up something, it is only fair to spare no effort on it. And if you see that your current position doesn’t allow you to do so, you can always change it. Making changes is never easy, it takes an unordinary strength of character to alter the usual course of events. But the option to never fulfill your potential is way more depressing. Don Burris understood this and didn’t falter to make a change in his life. The change that let him found his own company.

The year was 1971. Don Burris has just left the Redfield company that specialized in optics to build better sights and rifle accessories. During the first four years, the company manufactured scope rings, scope bases, and open sights, but in 1975 Burris released their first riflescope by the name Fullfield. This model became an industry icon and brought Burris their deserved fame.

Within the last decades, Burris has expanded the range of goods they produce. Gritr Outdoors presents to you the collection of Burris goods.

Hunting scopes are the most recognizable Burris product. The legendary Fullfield model is constantly modified to keep up with modern tendencies. The latest generation of Fullfield E1 scopes is produced with the implementation of cutting-edge technologies that add even more precision to the iconic scope. The Burris Scout scope was developed to be a perfect match for the popular Scout rifle. Low-to-medium magnification and significant eye relief make this scope an excellent choice for mid-range target shooting.

Burris red dots are designed for situations where magnification gives way to faster target acquisition. 1x magnification allows the user to shoot with both eyes, improving the accuracy for close range and moving target shooting. Tactical red dots with 3x magnification will come in handy when shooting from long distances, giving the shooter a field of view that riflescopes cannot.

If you want optics that come separate from your rifle, binoculars are one of the options. HD lenses combined with an ultra-rugged body make for an excellent glassing tool. With magnification ranges from 8x to 12x, Burris binoculars are a reliable pair of additional eyes that will never go amiss.

A Premium level 20-60x Burris spotting scope is the all-revealing window that will allow you to spot animals and birds from a mountain away. Even the night sky will not conceal any planets and celestial bodies from you, which makes this scope a perfect choice for stargazing. Premium quality lenses ensure maximum light transmission in any lighting conditions.

It all began with scope rings, but it will surely not end with them. Burris scope rings have been on the market for more than 50 years and yet are as popular as ever. A reliable mounting is the foundation of a well-performing scope and nothing can test reliability better than time. Burris has met this challenge with absolute success.

Gritr Outdoors is happy to present you with our collection of Burris optics. If you are already well-acquainted with Burris scopes, you might be pleased to find some of their finest models among other pieces of Burris equipment.