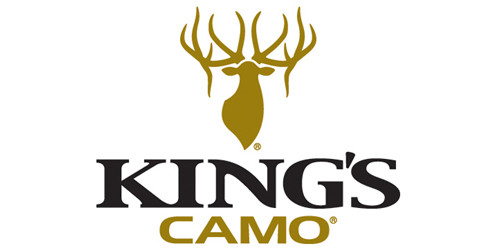 A royalty among hunting apparel brands, King’s Camo spectacularly walked into the hunting industry back in 2000. The year marked a rising interest in camouflage, with the new patterns being developed and improved technologies being introduced. King’s, a graphic design foundation established in 1995, designed revolutionary King’s Shadow Camo patterns that became an industry’s benchmark. The company was soon rebranded as King's Camo. Within the last twenty years, the brand  has introduced patterns for all sorts of hunting terrains. Kings Camo Desert Shadow, Mountain Shadow, and Snow Shadow series are designed specifically to facilitate hunters in their pursuits. In 2021, the brand released a brand new proprietary pattern, inspired by the natural colors and terrains of North America.

Naturally, you can get a complete hunting outfit as well as separate items to complement the existing set. Kings Camo pants feature high-quality polyester - durable yet lightweight material. Jackets and vests offer varying degrees of insulation depending on weather conditions. If you happen to live in a high rainfall region, Kings Camo rain gear is 100% wind- and waterproof and will keep you dry even in a downpour, all thanks to TX Waterproof membrane.

Kings Camo outfits the serious hunter from hunting camp to the stand or blind and back again. King's Camo apparel is available in both men's and women's sizes, and it comes in affordable cotton designs or quick-drying polyester styles. Hunters who encounter cold climes will love King's Camo XKG layering system that adds the breathable benefits of merino wool to hunting apparel systems. King's Camo also sports unique camouflage patterns tailored for the most popular hunting environments.

After a long day of hunting, you can retire in King's Camo sleeping bags and sleeping pads, and you can carry your gear to and from camp with versatile King's Camo backpacks. However you prefer to hunt, King's Camo has the product to match, and now you can get it all for less when you order direct from Gritr Outdoors.

Gritr Outdoors is an authorized dealer of King's Camo.